Am I a Fortune Teller? No, I look at facts, let’s look at housing data from Standard & Poors

In Search of the Vibe 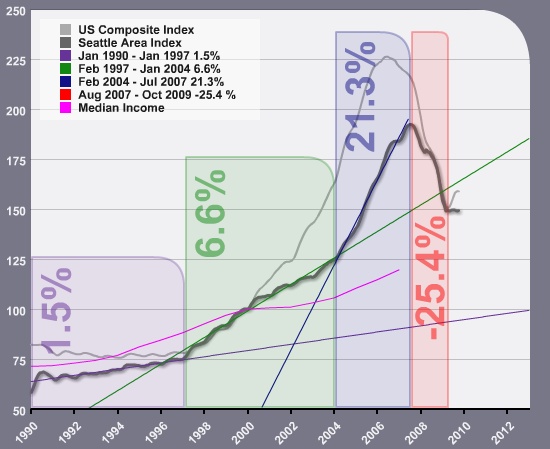 Once again. In October of 2008, I wrote a post looking at the history of housing prices in the Seattle area.  Since my clients are still asking me to predict the future (should we buy now or wait??) – I thought it was important to update this data to see exactly what prices have been doing.

Explanation of the chart with some housing history:

The shift started at summer’s end in 2007. The red bar shows that in August 2007 to June 2008 housing prices declined at -19.1% per year. It looks a lot like a free fall. When will it end? To answer that question with any kind of logic, we need to look at the rate of increases before the fall. On the chart, the bars also have lines that are their same color. The lines are an extrapolation of the increase rate.

So, we want to look at where this current drop will meet back, with the older, slower, saner, rate of increases. Since I last posted in October of 2008, prices continued to drop, and dropped at an average yearly rate of over 25% until the first quarter of 2009.  Then as you can see with the dark grey line, prices have stabilized – they are jogging along at a steady pace.  The light grey line in the US Housing Composite Index, and overall in the US, prices are going back up.  In the last post I predicted a more steady decline, however, the unemployment rate and the economy as a whole took a blast in 2008, which I am sure explains the dramatic drop in the red bar.  If Seattle follows the US, we could certainly head back up to the 6.6% rate of increase line and see an uptick in prices.  Or, we could stabilize and head for a meeting with the median income, which seems like a logical prediction, since our economy and how people are viewing and spending money, has become just that, logical and now a little more predictable.

Seattle’s median housing price ($321,500) is of course significantly higher than the US ($178,000), which I think explains whey we are not going up right now, we were already higher to being with. Current median price data from the National Association of Realtors.

Yes, normal and stable would be great. All in all, I do believe that is what 2010 will serve up. So, is it a good time to buy? With the Expanded Housing Credit and amazingly low interest rates, my answer is yes.

Data reproduced with permission from Standard and Poor’s